Within The Screened Circumference of the Minds Eye

Beyond the 'reflected-real', the surface of a soap bubble returns us to certain phantasms of our own invention. Figures swim across its boundary surface – visions sensed beyond the shift of optics. Here the imagination is given sustenance by the flow-lines of the specular to create a visage of the world forged into a paragon of the fantastic or ideal. The ancients used this trick well when they fashioned glass into their crystal scrying balls. To see that far into yourself, and into the distance, you have to loose yourself in the glare of something bright and indeterminate. The lens through which the seers peered to view their future worlds was a mirror to their internal landscapes. The orbiculum of their fortunes was a mirror to their psyches. So, the language of the mirrored sphere contains both the platonic description of the globe and the metaphysics of the mirror. To see the future upon the bubble's surface is to meditate beyond its outer surface. We go inwards towards its centre to gain lucidity so that we may shed some light on the essence of a thing. 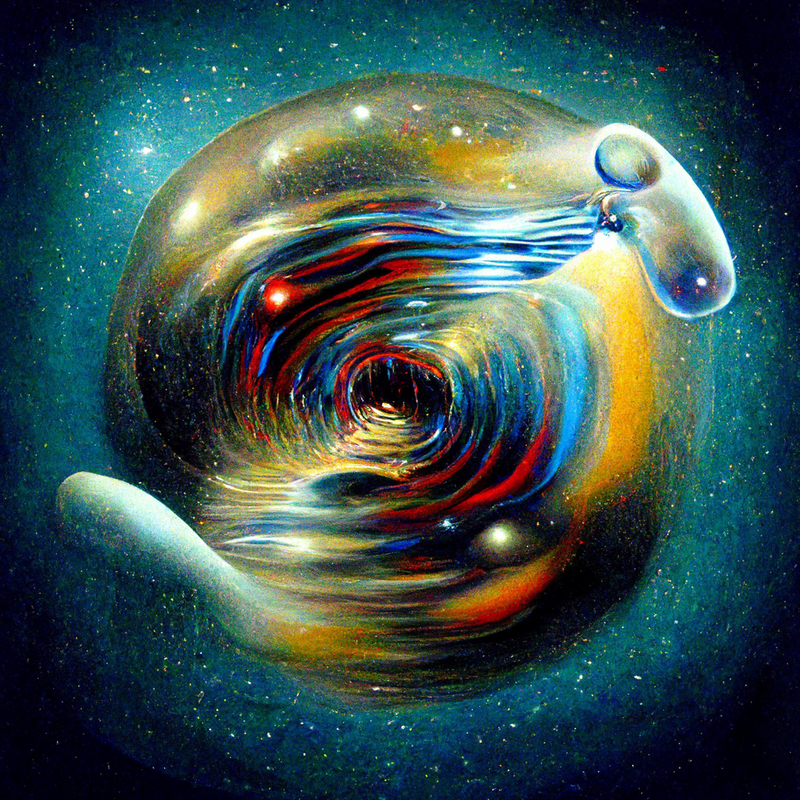 Light gains a sort of supernatural materiality when it passes through such refractive spheres. It is a light that focuses our thoughts and clarifies our visions. Its as if the particulate materiality of photons had the ability to animate our thoughts directly by physical effect; a fantastic light weathering our visions into their final fixed forms; phantom copies of the world doubly contained within the screened circumference of the minds-eye – images of curved space and the exotic shapes of contorted Kleinian tautologies. Moreover, the colours emitted from these spheres always predominate towards the green or blue – again mimicking the verdancy of our own terraqueous globe. And, because to sense the details held within the scrying bubble we must first approach them from afar, we sense the planet from the inner space of a distant revelry, a paradoxical point in the imagination located somewhere between and behind our eyes – a distant place that is so close to us. The best models of the cosmos are approached from that far-off distance of inner space and such fathomless introspection.

In Borges's classic tale The Aleph, a small round object hidden in a cellar evokes an image of a glass sphere . a lens or bubble which holds the whole world. This 'Aleph' could be the same glass globe used by crystallomancers, for both contain the future. In this story, the narrator (also Borges) enumerates, in one long single sentence, a list of things that can be seen within this sphere. He sees deserts, pistons, books, and human figures, and by further hints he suggests past events as well as things yet to happen. By moving across great distances of space and time, and by invoking objects both mundane and symbolic, Borges insinuates everything that exists in-between – the Aleph, therefore, contains the entire world, perhaps the entire universe.

At first the list of things he sees seems random but we glean some precious clues from references to other mirror-globes and spheres. He sees the endless reflections found in halls of mirrors and those dizzying infinite recursions that devour themselves: 'I saw, close up, unending eyes watching themselves in me as in a mirror; I saw all the mirrors on earth and none of them reflected me.....' Later he echoes these images once more when he includes an image of a closet in Alkmaar which contains 'a terrestrial globe between two mirrors that [is] multiplied endlessly'. Finally we are left with yet another model of the universe in the image of a Persian astrolabe. If the Aleph prompts an image of the scrying ball then it must also suggest something of the eye itself. But it is an eye suggesting not what is seen externally but upon the lens of our inward-glancing memory, for what Borges saw in the Aleph was defined by his own memory and tinted by his inner dispositions. By the end of the story the narrator of the tale intimates the possibility of other Alephs existing in the world. And if, as Borges's Scholar Evelyn Fishburn has commented, the ‘logical development from the postulation of a plurality of alephs is the notion of a plurality of universes’, we might surmise that Borges perhaps intuitively grasps the concept of a multiverse of which foams and bubbles have, in the last century, been the dominant model. (Fishburn, E. (2012) “El Aleph”: A repeating universe. Variaciones Borges 33: 29.)

The chaotic visions seen in the Aleph also echo images conveyed in a poem written much earlier, in the seventeenth century, by metaphysical poet Richard Crashaw. That poem 'Bulla' (Bubble) evokes images and allusions that rise and swell in profusion like perfidious simulations. Like the Aleph, the bubble is a conceit from which to explore the entire world in images and survey its every detail. The images projected in this psychedelic poem evoke descriptions of patterns found in dynamical systems, of which soap films are a good example. We are launched upon a stream of ever-shifting chimeras which quickly disperse and reform, mimicking the mutable patterns on a bubble's surface. The apparitions give form to a poetics of immiscibility, dreamlike suspensions and a musicality of diffusional forms. But though abstract, these images again present themselves as allusions to human behaviour, acting as allegories of chance and fate.

Further, Crashaw connects the ephemeral beauty of the bubble 'and the spiritual significance of existence'. Like others after him, he sees in his bubble an entire world in facsimile: 'Lo, repeated here we see / In a sportive mimicry. Here the tiny tender world / Within its own brightness furl'd'. He finds auguries and oracles of things when he says 'I am Fortune's looking-glass, The countersign which she doth pass'. It seems as if the poet is scrying the turbulent patterns of the bubble to construct his poem, listing the multitudes of things seen as ghosts upon the bubbles shell: 'Gleams as of the peacock's crest, Or such as on dove's neck rest; Opal, edg'd with amethyst'. And in the final verse he preempts the Vanitas when he finds in the bubble's unpredictable path and sudden disappearance an analogy for our undetermined fates. The bubble is, once again, an image for humankind's inability to face uncertainty.

Part three in a series...