Look upon a soap bubble's shimmering surface and allow the deluge of its shifting clouds of prisms to flood the mind. Here is a floating looking-glass world – an accomplice on an inward journey of the imagination into the centre of the minds eye. Bubble reverie is an adventure through prismatic galaxies and the doubly reflected light of the unbounded oracle of the orb. Bubbles expand the mind to open up paths to inflationary universes of hyperbolic fiction. They are minimal surfaces optimised for maximal thinking. 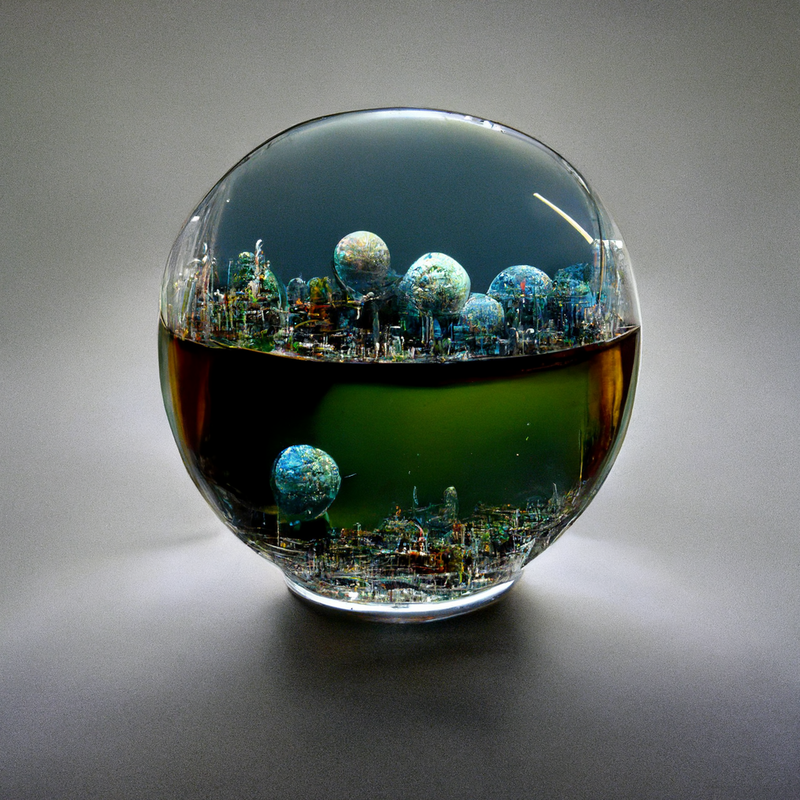 Who has not enjoyed the image of a captive world contained within a floating crystal sphere? A reflected world that enjoys a paradox of space because the whole world in which it is contained is contained upon it. Our Renaissance ancestors also knew that the bubble, if mindfully observed, appeared to be a world replete. And that analogy is perfectly expressed in a portrait of Isaac Newton by the Bolognese painter Pelagio Palagi called Newton Discovers the Refraction of Light. The painting depicts the scientist sitting by a globe but gazing contemplatively in the direction of a small boy blowing bubbles.

The soap bubble was singularly important as an object of investigation in: Netwon's Opticks: or, a treatise of the reflexions, refractions, inflexions and colours of light, published in 1704.

Furthermore, bubbles converge the two prime elements – air and water – as well as insinuating the third: the earth. They contain both Gaston Bachelard's 'true eye of the earth' which is water and Victor Hugo's 'magnificent peacock called nature' which floats before our eyes.

Victor Hugo, The Rhine: a tour from Paris to Mayence by the way of Aix-La-Chapelle: with an account of its legends, antiquities, and important historical events, 1900, translation: Aird, David Mitchell

In the seventeenth century, bubbles become a key symbol of the vanitas vanitatum – that allusion to the idea that life is ultimately empty, fleeting, and purposeless. Life is as transient as a bubble and prone to obliteration at any moment – it is a short journey towards becoming nothing. In certain memento mori paintings bubbles became the airy counterparts to earthy skulls and flameless candles. They were pictured floating across the picture plane, past bones and wilting flowers, and onwards towards a rendezvous with their own demise. The idea behind these paintings was to remind the viewer to pay no great importance to the pleasures and vanities of life, for all these things will eventually cease to be: 'remember you must die'. But if the bubble is an image of mortal futility and the inexorable wearing of time then it is paradoxical that it is also associated with childlike joy, as it would arouse a perennially playful curiosity among young and old alike. So the bubble is a cunning double agent, acting both as a symbol of our existential uncertainty as well as a trope of playfulness that might distract us from such mortal vexings. The bubble is a deceitful thing, for every adult may sense that behind its playful innocence is an image of ones own death. That small disappointment we feel when a bubble pops is more than telling.

If you reduce your scale to Lilliputian dimensions and enter through the bubble's liquid membrane, you'll soon find yourself looking up at the domed immensity of a vaulted sky with stars and constellations drifting across a milky borealis. Microscopic zooms reveal plumes that seem to mimic the shifting plates and tectonic drifts of our own planet in time lapse mode. Diaphanous swirls quote the movements of mists and cirrus clouds as they move across the surface of the earth – strange mirages brought into focus by the optical rumours that roam the bubbles surface. Here is a miniature world woven by a loom of prisms; a world of tiny cyclones and coriolis spirals. Having moved through the inflationary foam of your own imagination, you look upwards at coruscating trails to confirm the layered nebulae that spread across your field of vision. You have almost turned your imagination inside out. The mind – another universe inside a bubble – floats off disembodied into this scheme of visions and leaves the body weightless. Inner visions, like bubbles, pop or join. The mirrored sphere has become a model mirage. Its reflected space curves the entire world into a single point of view like Escher's famous drawing of a mirror sphere. The bubble melts the outer image of the world and returns it as another (i)mage as it wraps the landscape of the world into a single sphere.