Exploring the sensorial heritage of the Amstelpark

What we inherit can be taken for granted and made invisible as much as it can be cherished and returned to, bringing both possibilities and responsibilities. Our heritage anchors us in the worldly. It highlights important relations and each thing transmitted comes with the promise that we will care for it before passing it over to someone else. As such, our heritage binds us in an invisible network to our environment and those who inhabit it. Field Academy program at Zone2Source curated by Cocky Eek centred the sensorial heritage of Amstel park. Part of the Shadow Floriade, the program celebrates the fiftieth anniversary of the park. The workshops delved into the discreet and intangible legacy of the park and the bodies that roam this space.

Half a century of more-than-human exchanges has left many traces in the park. These are as abundant as they are hidden. To find them, we must first arrive in the park, become part of it and leave our own traces. 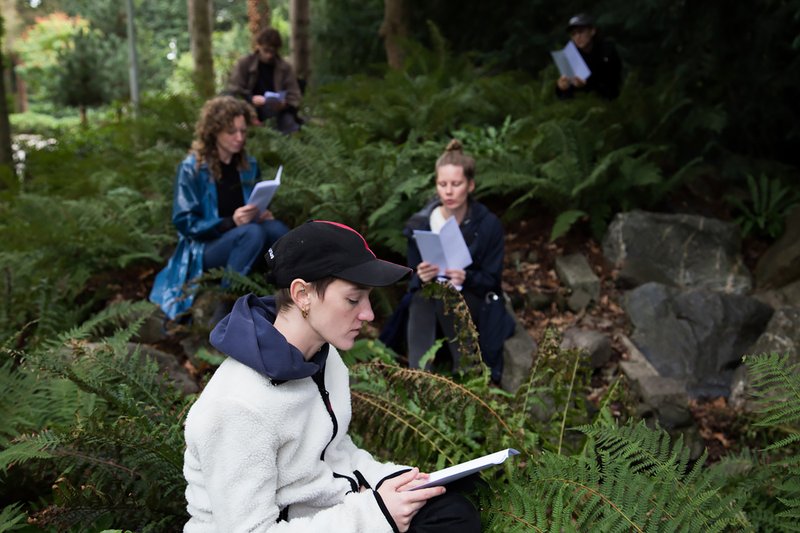 Lada Hršak invites us to listen to the voices from the water edge and people take their shoes off to get close to the ground. We observe the surface of an 'insignificant body of water'. It is not a canal, a pond or a river but all of those things at once. On its bank, objects sink softly into the ground saturated with water, giving themselves over the carefully planned landscape. Silt and mud enter all the interstices: skinfolds, crevices in the fallen bark, and slits in the paving of the bridge we stand on. The coming together of the canal-river-pond, the invisible bodies it shelters and our continued presence allows for a collective amassing of impressions. Together, we engage in the archaeology of minute actions. Tiny bubbles bear witness to so much life in the mud, while the pattern of fallen leaves attests to a specific wind pattern, repeated over and over. 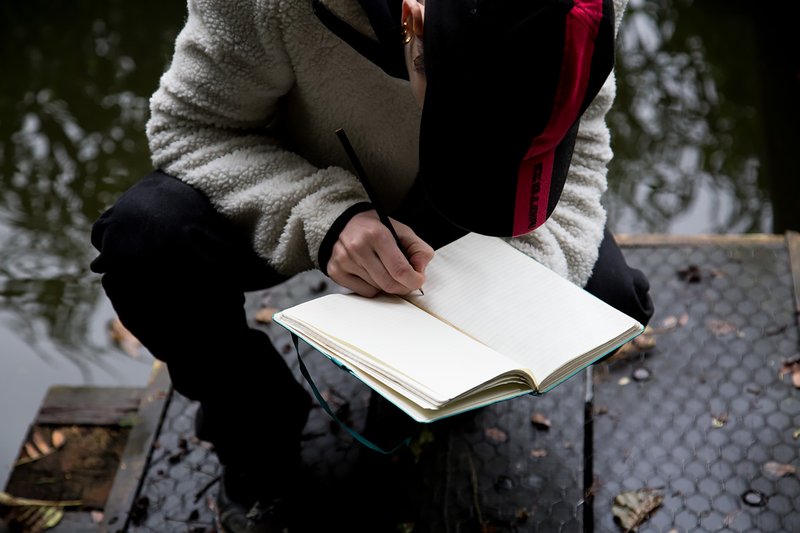 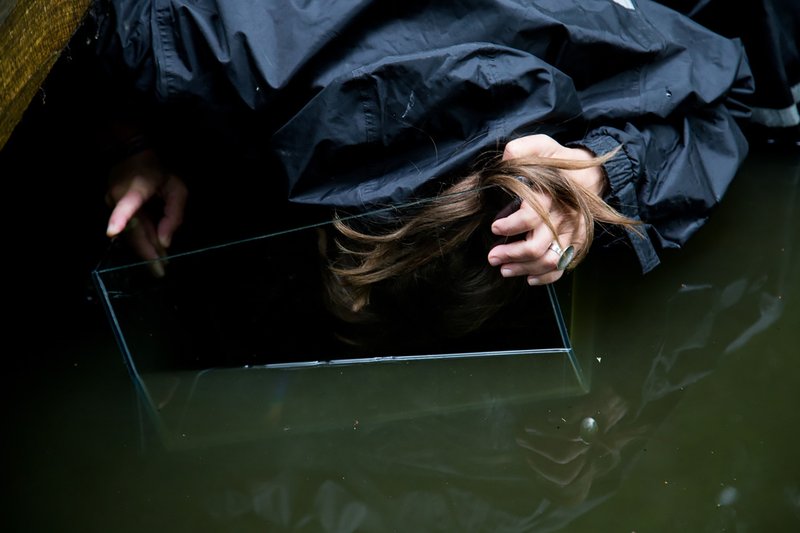 Near this body of water, I sense the invisible presence of people passing by it every day, microscopic life in the soil and the water level changing over time. When the edge of my nail digs in the asperity of the bark and peels its layers of carbon, it caresses a timeline of growth and decay, that slowly accumulated over long periods. It is separating the result of events I never encountered. The environment is both saturated with interactions and bursting with the openness of new things emerging, of alliances waiting to be formed. Looking at a singular phenomenon becomes nearly impossible, as each gesture to its many neighbours, past and present. Where one body ends and another begins is an open question. 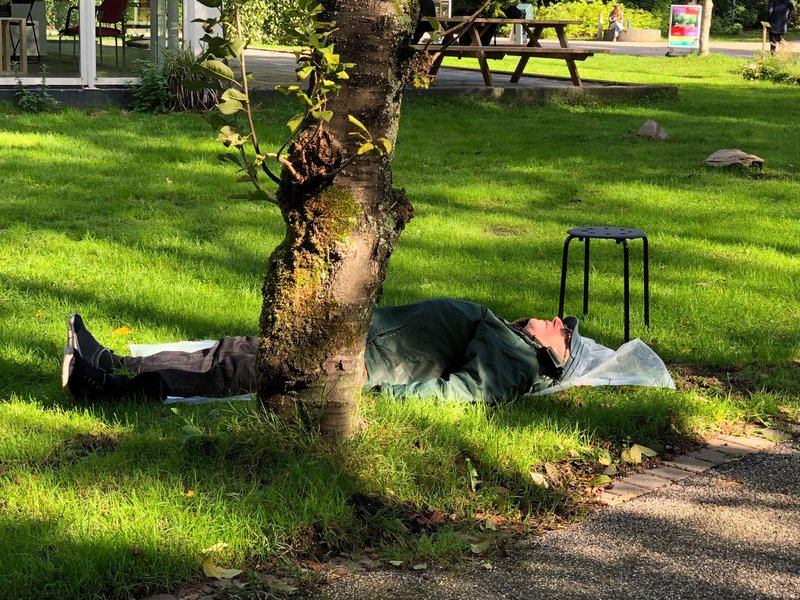 At times, the effervescent brawl of bodies of the park also implies friction. To deal with it, the workshop by Carolyn Strauss starts with a verbal acknowledgement of the full heritage of its participants. This includes the diversity of our beliefs, sexualities, races, physical conditions and mental preconceptions. While initially discomforting, this allows the involuntary heritage we bring with us to be worked with and given space as a precondition for the creation of a collective heritage. In looking at what we were given, we can start to reflect on what we would like to pass on and what space we are creating. Afterwards, we are invited to find (and be found by) our more-than-human allies. These could be plants, animals or other lifeforms encountered. There again is worthwhile discomfort; in finding a sustainable position in which to spend time with our ally, or in being watched while doing something weird by the other visitors of the park. However, there is a lot of beauty to be found past this. The dark green leaf of the hellebore opens like a many-fingered hand, a snail uncurls telling us to slow down and the ears of a rabbit respond to our every move. 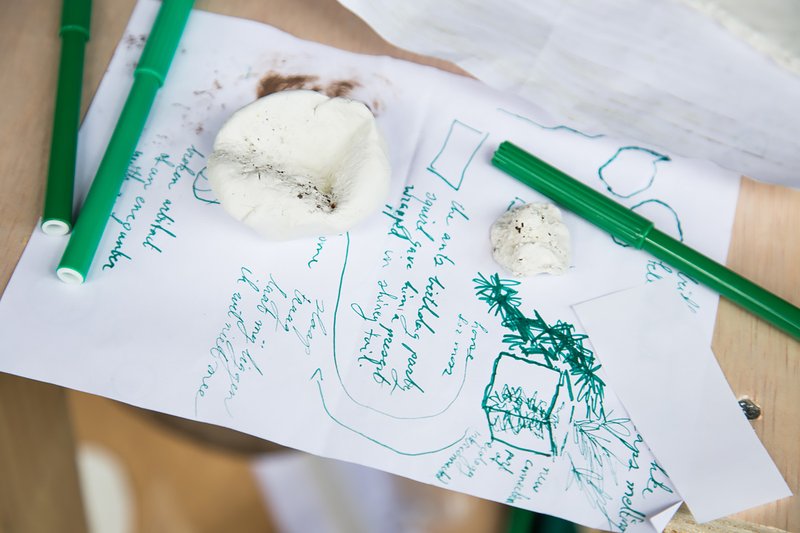 On the tables in the Glazen Huis, many objects succeed to one another over the weekend. There are transparent jars of all sizes, neon yellow twine, an empty aquarium tank, self-drying clay and long plastic sheets… All are taken out of their common use and become tools of observations and poetic measurement. A small jar filled with water becomes a magnifying glass, and the aquarium tank is repurposed as a diving bell. Googly eyes placed on the knee, the shoulder or the back expand our visual and kinaesthetic field. A curved branch furthers a human finger to scrape against the clouds and inspire new forms of movement. A found stone becomes a pen with many stories to write. Here metal rulers are not indebted to the metric system but are long probes sensing in corners inaccessible to our fingertips. With these tools in hand, the line between observing and imagining is thin. They enlarge details that could be easily missed, place foreign elements as landmarks in the park for the telling of new stories and allow for multiple interpretations. 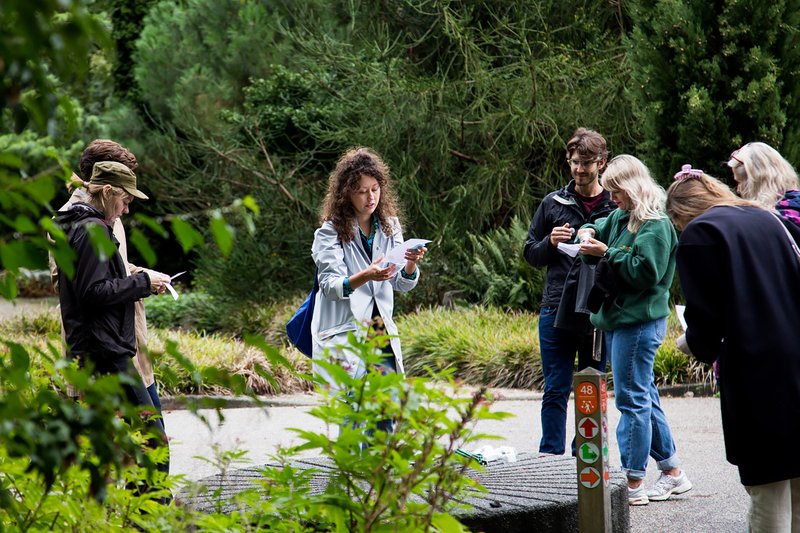 With Kamila Wolszczak, participants seek broken artefacts in the unmistakably human park. These tell stories of the subtle points of ruptures in the environment. For instance, a wilting flower is as fabricated as a lost pacifier. And it is not just humans who produce the artefacts in the park. Worms create cathedrals in the rotting trees and generate by breaking down what has outlived its time. Everything is reshuffled and the story continues: the objects have many pasts and many futures lodged in them. We conclude that there is so much more to be found through imagination and reconstruction than if we had witnessed the events we are researching in the first place.

The observations are as transitory and fleeting as the park they stem from. The thin clay captures the shape of the flower but does not survive its trip back to the Glazen Huis inside the pocket of the observer. Pictures are taken but prove to limit the experience encountered and sometimes become a distraction. I take a picture, {click} and the sound of the shutter highlights my presence and the environment shudders, disturbed. 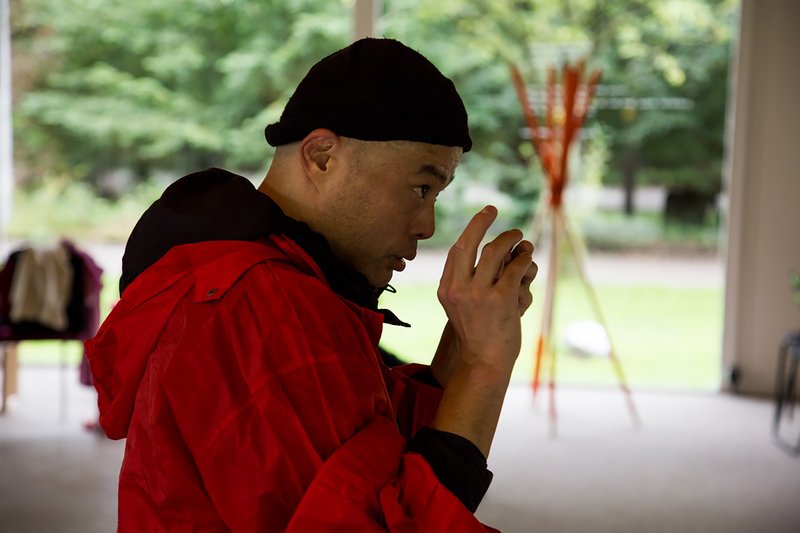 We listen to the park's stories and place our own within its architecture. With Monster Code, Theun Karelse brings us techniques to use the landscape as a substrate to hold information of all kinds. Soon, the paths of the park are littered with knowledge deposited in the space by the participants: a recipe is hidden in the trees and a list of pirates finds its place in the front shop of restaurants. This has a profound impact on how our stories are remembered, they are now of matter, live and die with the elements that hold them. The park becomes fluid, everyone senses that whatever we place within it is precious. 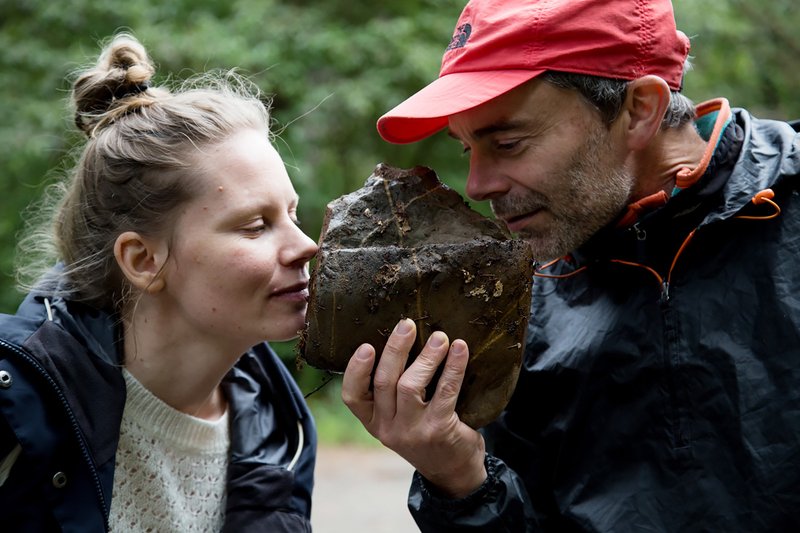 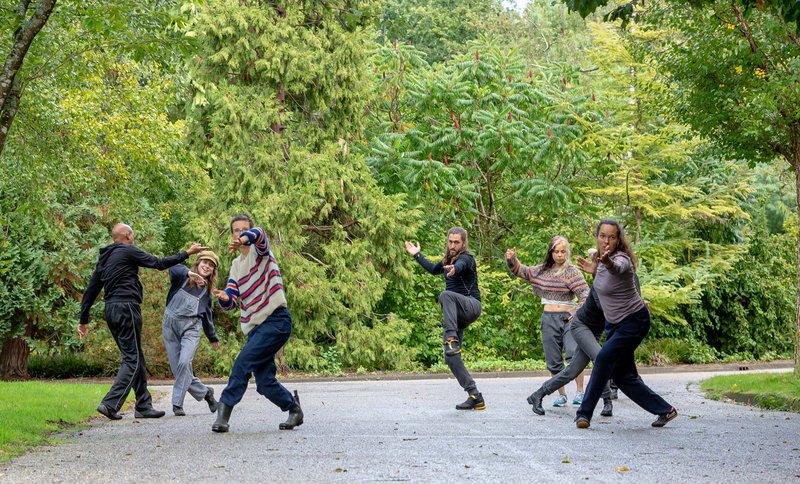 Despite the increasing fluidity, we find a sense of inescapable togetherness. After all, the heritage of the park is our common ground. Under the guidance of Luigi Kwas, we breathe and walk like drunken dragons together. Inside the Glazen Huis, Kenzo Kusuda teaches us to see ordinary details as if we were the first ones to discover them. While the practices are new to us, they run so deep in the bodies of the organisers that they reach us immediately. Anna Bierler and Marit Mihklepp invite us to become part of the Stone Network. The group sits on stones before participating in a collective reading. A felt companionship unlocks between the people of the group and the rocks holding them. Everybody reads the same text at their pace. The many voices resound with meaning like sonic wavelets in the clearing, all saying the same and all saying something different. In the workshop Resonating Voices led by Sigrún Gyða, genuine care and attention to include those who do not feel comfortable singing is brought to the group. Drops of rain start to sing with us, then yell with us, then quiet with us. The park is effervescent and lively. Despite having been built for humans, we still have not found all the ways possible to interact with and inhabit it. 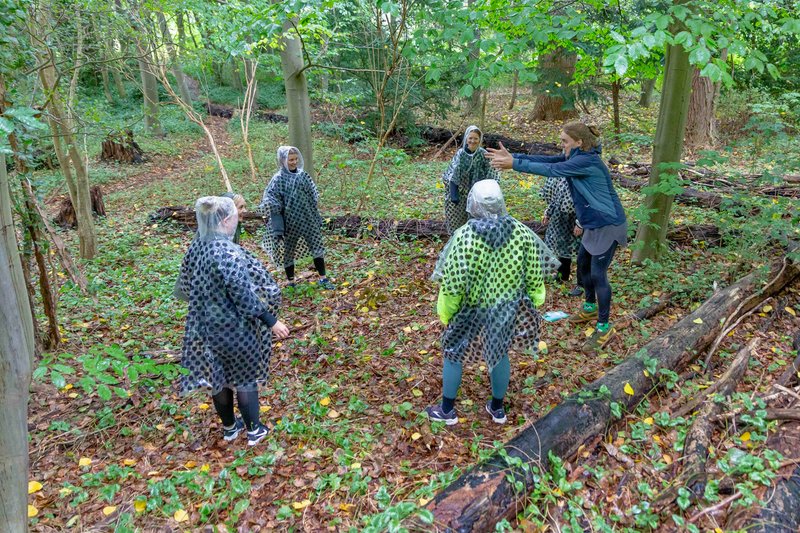 On sunday evening, the children gift us a parting ritual which they have worked towards for the entire duration of the weekend under the guidance of Mischa Lind and Rachel Schuit. We thread lightly off the trail to reach an old sheepfold. There, we bend low under the arched they have built before receiving the blessing of a nettle leaf. Like all the sensations which have flooded our bodies over the weekend, the stinging of the leaf resonates in our bodies for a long time!