Last week we ran an AccessLab for anyone interested in climate change or involved with Extinction Rebellion. These are some of the messages we’ve had in the days since the workshop:

“As 'amateurs' we had no idea about the process and monetisation of publishing scientific papers. We had no idea what to expect of the day and were slightly unsure if we were amongst the target audience but from the start we felt included and engaged. I'm so glad you got us to think about questions in advance and we have both come away with so much more confidence (and a few more tools) to enable us to adapt our message to our audience, backed up with useful, relevant and reliable facts. Finally, the food was delicious too!”

“Thank you so much for fitting me in to the training today, it was brilliant. And the lunch, delicious. I got so much out of it for both the XR fact checking me, and the just started an MA me. I thought it was perfect actually, the morning overview and the afternoon getting 1-1 with an amazing researcher was incredible. I think if you need to reach more people you could give 2 or 3 per researcher, it wouldn't be as amazing but would spread the learning further to more people quicker. It might be useful for people to give feedback after that session on what they learnt to the whole group but maybe everyone would come up with the same things. I made myself a word document after the day so I can come back to it, and in the spirit of research for all I have shared it with my XR group (small gp atm, Hayle) on WhatsApp and with the other students on my MA intake.”

“The event was really helpful and the food was wonderful. Even Better If .… Break out to assess usefulness/veracity of same article (that has flaws) with one researcher between 2 or 3 for a good half hour after introduction to what to look for then feedback in group, with leader filling in gaps. Shorter sections on publishing and how research works after break out”

“I just wanted to say a huge thank you to you and all the team of scientists at the AccessLab event yesterday. I certainly got a lot out of it, and conversations yesterday have given me food for further thought and areas to explore. Would you also please pass on my thanks to your colleague who prepared such a delicious and nutritious lunch for us all.” 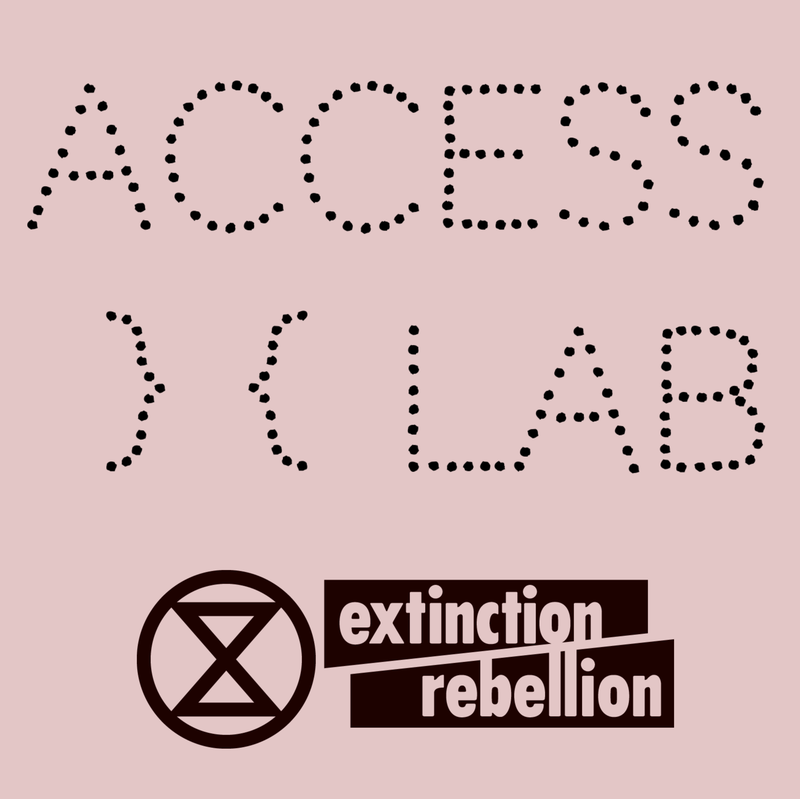 The aims were as for any other AccessLab:

Our researcher mix for this event was around 50% social sciences, 30% environmental/conservation sciences, and 20% other natural sciences (with plenty of overlap).

We were interested in whether this model was useful for people who are seeking information on what to expect as the climate changes, how to address the problems this brings, or how to motivate and elicit societal change. Extinction Rebellion (XR) is gathering a considerable force of people, some of whom are only just discovering the severity of our situation and most of whom have a great thirst for information. Albeit often coming from a different perspective, there is also a palpable thirst for information and contacts from others who are using more traditional routes to push for change (through standing for their local council or government, or becoming involved in initiatives like Neighbourhood Development Planning).

Questions and topics that our participants looked into included:

We’ve tried and tested the AccessLab model with lots of different groups now, tried out different approaches, and tried having other people running the workshops – so the model is pretty well honed now. The only continuing issues with the model from our perspective are:

We felt the time was right to take a step back and run one entirely voluntarily and with no funding so we could more closely fit with the XR ethos, and trial focusing on a single topic. We also asked for help with more ideas for how to do it in a more sustainable way.

Unusually, this is the only AccessLab that we've barely advertised ourselves - we just asked three people who are deeply embedded in XR to send it out through their usual channels, sent it to two local councils, and put out a couple of social media posts. Despite so little advertising, we were oversubscribed to the point of being able to fill two more additional workshops. We arrived at the studio on the day to find a queue by the front door an hour early, with people who hadn't signed up. The workshop format is based around people working in pairs – one participant with one researcher, so drop-ins don’t work well. We took 3 drop-ins, and had a few trios instead of pairs, and the rest were turned away (after taking their details in case we can run another workshop later in the year). The participants we took were an fabulous mix of XR activists, Councillors and Neighbourhood Development Planners. 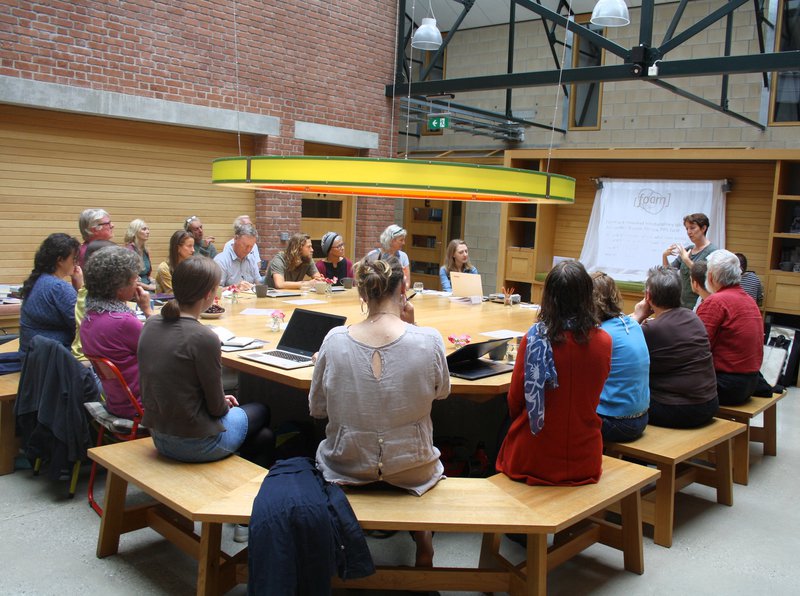 One interesting outcome of running an event under the XR banner was that one researcher’s institution only allowed them to come if they were partnered with a Councillor not an activist, and they were not allowed to use social media to talk about the event. Possibly the other researchers would have faced similar difficulties if their institutions had been aware of the event. In these cases FoAM generally encourages an ethos of asking forgiveness rather than permission.

Previously we’ve run a preparatory day just for researchers before the main workshop. The primary purpose of these is to look at all the different ways of finding and judging scientific information, and think about which are most appropriate for the particular audience – it also gives us a chance to make sure the researchers understand they will be working as equals with the participants. This time we planned on only taking researchers who had previously done an AccessLab, to avoid the need to do the prep day. In the end we needed to find more researchers to help meet demand, so we took one who was new – just sending a list of the various ways to access paywalled papers so they could try them before the event. Judging by the feedback from this researcher, this could be an easy way to simplify the model:

" I really enjoyed taking part and I think the research task went well! The list of resources you gave me to look up was really helpful - I hadn’t heard of any of them other than SciHub so I was glad to have had a quick chat with you beforehand. I also learnt a lot and loved the collaborate approach. That really helped me realise the extent to which I rely on implicit and specialist knowledge to judge the reliability of information, so it was quite empowering to see that I could make a small contribution to improving access to information, which is refreshing when outreach is so often about ‘experts' lecturing to a fairly passive audience.

The highlight for me was definitely meeting so many interesting and inspiring people from the local community and learning about various things to get involved in. As a side note, I think that's a real benefit for researchers who don’t necessarily feel like they belong in the university bubble. It was also great to connect with other researchers who are passionate about making science more reliable and accessible, as it can sometimes feel like few senior academics care. On that note, I that think you and the other speakers struck a great balance between being open and honest about the problems in science but also highlighting that scientific research can be an enormously helpful and empowering resource to access. That balance feels really important for building trust in a climate where there seems to be little room for nuance in public discourse.

Sorry for the long email - you’ve probably been inundated with positive feedback - but when [other researcher] told me that there was an opportunity to get involved she said it would ‘feed my soul’ and she was definitely right!"

To reduce the work further, three of the researchers took on major jobs on the day, so it was truly a collective effort – Lotty Brand did a talk on publishing, Anna Hughes did a talk on research funding, and Kat Roberts made the lunch. Both talks were far better than we’ve done before because they were more researcher-centric, the lunch was superb, and it was a real bonus having all three deeply involved and invested in the workshop. To shorten the day a little, we scrapped one part that we usually do (Corridor of Trust, looking at the sources of information the different groups use), and didn’t do any evaluation in person (just over email afterwards). At the end of the day a representative for XR, Manda Brookman, did a short impromptu talk on what XR is all about. The talk slides are available here.

Throughout the day, Manda and another representative from XR (Zoe Young) were there to think about how it could work best for this audience. These are some things we think we could do:

Since the workshop, one of the participants has suggested to Cornwall Council that they fund these workshops as part of their (genuinely ambitious) plans for action on climate change. Of all the AccessLabs we have run, this one felt like the most contacts were made. From a personal perspective I am now in contact with councillors from a neighbouring towns (I am a local councillor myself since running an AccessLab for councillors, as is one of the other participants!) and we’ll be working together on our council climate plans.

Other things that are happening include the first AccessLab later in the year run almost entirely without our involvement (just a bit of consulting), which will be in Totnes and again aimed at people interested in climate change and environmental issues. I'll update this page once the details are available!