This autumn we have been developing a new version of the Farm Crap App with the Duchy College and Rothamstead Research. This project is about tackling the difficulties farmers have using natural fertilisers while needing to report realistic figures the government agencies - and understanding the guidance they provide. The original version was a big success, but only contained information on a handful of manures and didn't deal with the nutrient content of the soil.

In the "Pro edition" we are adding a lot more detail - the nutrients already in the soil can be estimated based on the type of the soil and the previous crops grown there. The needs of specific crops can also be added - we are concentrating on grass, barley and wheat for the moment - as this is a huge area to deal with. Once you have this information you can subtract it from the nutrients added by the manure to come up with a picture of which manure is best suited to a large range of crop, soil, rainfall and seasonal situations. 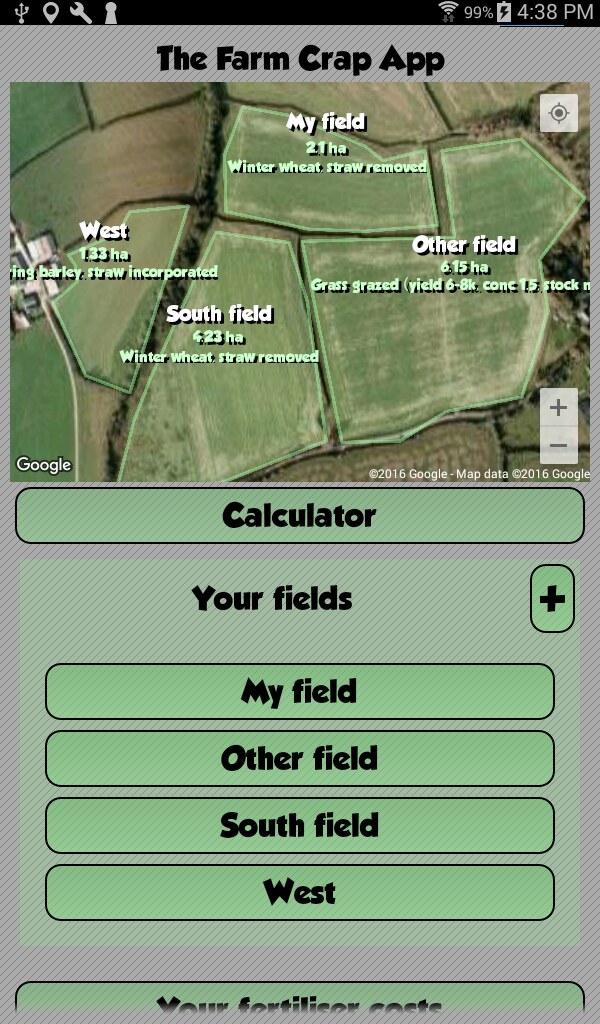 We are used to dealing with scientific data straight from research, but this data has been processed into a set of tables aimed at farmers and consultants by the agencies and civil servants based on the original research, which is very different. A lot of times you get the feeling that there is an underlying model being used which would be good to have access to. Meanwhile, we are taking these tables and converting them into a usable, minimal set of options that can be accessed and played with in the field - where the descisions happen.

We are also adding a new mapping feature, which was very much the most requested feature from the farmers and producers we tested it with. This allows you to draw on the map to record each field, which means we can get the size estimation from the GPS coordinates fairly accurately as well.