AlgoMech is our new international festival of "Algorithmic and Mechanical Movement", bringing performances, talks and hands-on workshops to Sheffield UK from the 12th-19th November 2016.

This new festival brings together a diverse range of art forms and mixes them up to present a creative mosaic of machines, live coding, music, dancing and power tools. From clog dances that mimic industrial looms, to techno music created with mechanisms built during the performance; cellos are turned into computers; textile patterns become musical compositions - this hand-crafted programme features performances and events that aim to challenge and inspire. Audiences will also have the opportunity to get involved in workshops exploring how to make music with code, or learn to play a traditional Basque instrument, the txalaparta as a duet witih a computer.

A highlight of the festival will be a full-on Algorave (algorithmic rave) at Millennium Gallery - dance to alien rhythms and freaky visuals, all created from code before your eyes. The line-up includes Graham Dunning showcasing precarious and unstable stacks of revolving vinyl records triggering synths and samples; Algobabez (Shelly Knotts and Joanne Armitage) blasting eardrums with their wonky algorithmic noise patterns and Renick Bell bringing his Fractal Beats sound from Tokyo. The algorave movement has roots in Sheffield but has spread to over 40 cities around the world, and this promises to be an amazing party with UIQ, Rephlex, Computer Club, Conditional and Seed labels represented on the roster.

Alongside this, an arts-research symposium will be hosted by the Sheffield Institute of Arts, featuring talks and performances and a keynote speech from composer and robot-maker Godfried-Willem Raes.

For the full line-up, and ticket info see our festival website algomech.com.

The festival is organised by FoAM and LoveBytes, and hosted by Millennium Gallery, Access Space, DINA and Sheffield Hallam. The festival symposium is chaired by Sussex University. 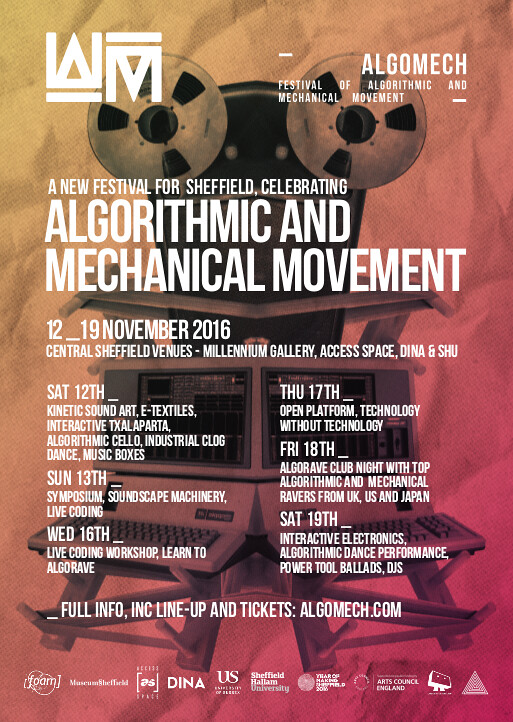