Manifesto Writing in an Age of Uncertainty

There is an old story of the birth of the avant-garde manifesto a century ago: macho Futurists shouting about torching libraries, flooding museums, bringing ‘the slap and the punch’ back into art, crashing automobiles, celebrating war and scorning women, hurling semen at the stars. 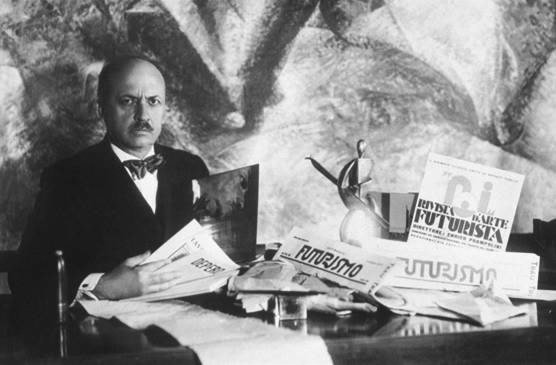 We’ve seen that violent posturing continue into our own time with the turgid manifestos of reactionaries, incels, and mass shooters. The manifesto has become associated with false confidence, dangerous certainty, deluded conviction – prompting the question: Is the manifesto still of any value? Is it dead, or should it be? Yet over the past decade the manifesto has assumed a renewed relevance. There has been a rise in manifesto writing online as well as on the streets.

Manifesto writing is a tonic for stagnation – in this, at least, the Futurists were right. It generates radical new ideas and frees us from the confines of cautious speech in times that demand action. Where there is a need for dramatic change, there is a need for manifestos. Unlike the essay, which is more tentative – in Theodor Adorno’s words, ‘fragmentary’ and ‘partial’ – the manifesto is confident and totalising, performing an authority it does not fully possess. It uses this confidence to bring imagined futures to life in the present. And there is a countertendency in much manifesto writing, one that deploys irony and ambiguity to puncture authoritarianism; this is also something we can use. Manifestos are hybrid, multivocal, and multimodal; blending text and image, disciplines and audiences. They span different (sometimes competing) registers; online and offline, spontaneous and premeditated, ephemeral and historical. Manifestos are unique in that they have long represented ‘bodies in struggle rather than simply ideas in contention'. They elevate physical, energetic, and accessible expression.

The frenzy of manifesto writing that swept early twentieth-century Europe was ignited by the publication of ‘The Founding and Manifesto of Futurism’ in 1909 – in Italian, French, and English (already showing the international character of the form). As scholar of the avant-garde Martin Puchner argues, ‘Futurism taught everyone how the manifesto worked’. Manifestos were indispensable to movements from Vorticism and Imagism to Dada and Surrealism. After taking hold in Paris, Milan and Moscow, London and Lisbon, the avant-garde manifesto crossed the Atlantic to New York and gradually made its way around the globe: to Martinique (Légitime Défense), China (Storm Society), Argentina (Arte Madi), Iran (Fighting Cock), India (Calcutta Group), Nigeria (Zaria Art Society), and beyond. By mid-century the manifesto had become a global genre and calling card for isms of all kinds. 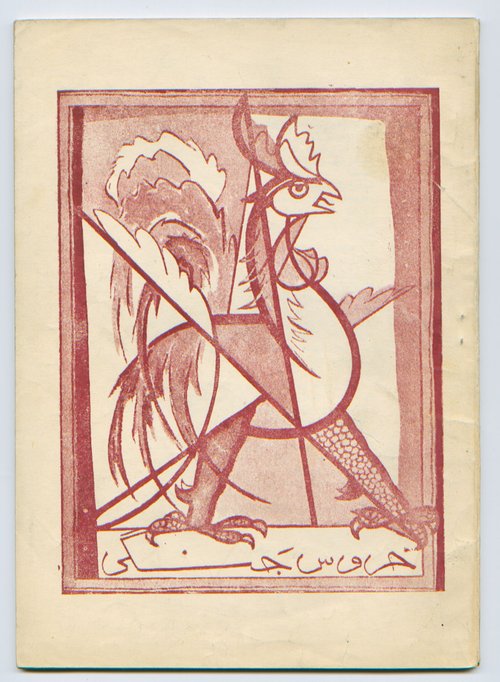 Since the rise of the internet, this global character has developed in strikingly new directions. The manifesto has announced new tendencies at the crossroads of technology and feminism, from Donna Haraway’s ‘A Cyborg Manifesto’ to Legacy Russell’s Glitch Feminism: A Manifesto, and technology and decolonisation (‘The Mundane Afrofuturist Manifesto’, ‘The Decolonial AI Manyfesto’). The manifesto has become ubiquitous as both a global and popular form, absorbed into mainstream culture through advertising, activism, and social media (where manifestos proliferate and mutate). The Covid-19 pandemic saw an explosion of online manifestos trading old certainties for new possibilities, calling for protests in the present, and future transformations. 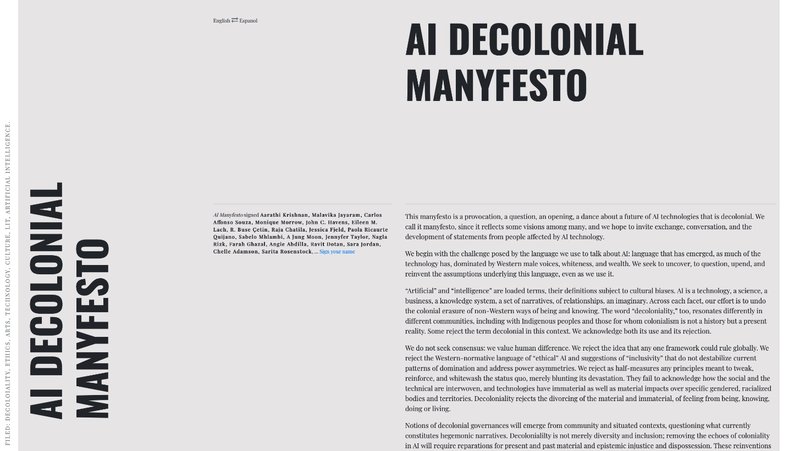 Manifestos ‘make progressive arguments and facts more legible and engaging to a wide and diverse audience’ (from Hertz, G. (2016) Disobedient Electronics: Protest). We write manifestos both to understand the present (and past) and to change the future. Manifestos often fail spectacularly – yet people keep writing, infusing them with utopian hopes and desires. By turns provocative, bold, and unpredictable, even dangerous, manifestos are always seductive and charming. It is no accident that many art movements are better known for their manifestos than for the works of art they produced. Manifestos are advertisements for the ideas they represent. To win converts they make themselves bright and compelling, full of promise, energy, and charisma. As readers we are swept up in their rhetorical fervour – reading The Communist Manifesto can almost make you forget those decades of dull totalitarian squalor; ‘The Founding and Manifesto of Futurism’ almost slips its ties with Fascism.

Marinetti, F.T. (1909) The Foundation and Manifesto of Futurism.

Going forward, we believe that the manifesto can serve, in the words of Bruno Latour, ‘Not as a war cry... but rather as a warning’. It is a form fit for the challenges ahead, capable of sketching new visions and bringing urgent causes to light. Over the years, we have been involved in numerous projects – SpeculativeEdu, Reconstrained Design, a handbook, Words in Freedom, Nesta, an unmanifesto on atopia – where the manifesto has opened up discussions, without ducking uncertainty. Manifestos can challenge narratives and norms, provoke new conversations, encourage critical reflection – using ambivalence or ambiguity to their advantage. There is a long history of ‘anti-manifestos’. To take one example, Romanian poet Tristan Tzara’s 1918 ‘Dada Manifesto’ declares: ‘I am writing a manifesto and I don’t want anything … I am on principle against manifestos, as I am also against principles’.

So how do you write a manifesto? It’s not that complicated. Start by surrendering measured, careful speech, opening the door to something more wild and unpredictable, and taking a stand. Once that hurdle is cleared, things are fairly straightforward. By design it is an accessible form for both audience and practitioner – you can use a template; borrowing from Moses, Marx, or Marinetti. Or you can write a manifesto in conversation with other texts, using quotations as illustration, support, or to set up counterpoints.

The key to manifesto writing is an adventurous spirit and a multimodal approach. Manifestos are usually short and visually striking, like the advertisements they resemble. After an eye-catching title, a preamble sets the tone, followed by the familiar list of tenets, vows, rules, or demands, topped off with a rousing call to action. The tone is bold, the language immediate, transparent, and easily understood. Rhetorical and visual cues may be borrowed directly from history – anything from Martin Luther’s 95 theses to Olympe de Gouges’s ‘Declaration of the Rights of Woman’. There are many possible stylistic variations: for example, the binary format used by the Vorticists (blast/bless) and Dunne & Raby (A/B).

Common rhetorical features include a heightened or excitable tone, an ironic stance, exhortations and appeals, aggressive verbs, repetition, slogans, shifting syntax (as the manifesto gathers pace), and sweeping declarations. Visual strategies may include anything from bright colours to oversized fonts to bold illustrations or elements of collage. Vorticism's BLAST (1914) had some clever writing, but its dominant feature was visual provocation: it was a red (or rather bright pink) rag waved at John Bull, with a screaming tabloid typeface. The Yves Klein-designed Nouveau Réalisme Manifesto (1960) was scribbled in white on a background of his trademark blue; again, the eye-catching colour was the key ingredient. 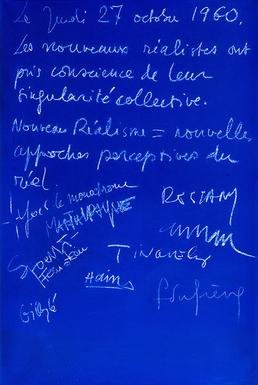 Manifestos have always used the motif of the mask. This emboldens the speaker, granting permission to express or reveal things convention would normally preclude. Wearing the mask of the manifesto’s performed authority, the speaker takes on a symbolic power and freedom. In effect the manifesto is a licence to voice powerful emotions like anger and outrage – and uncertainty? What would a manifesto of uncertainty look like? It might deploy the strategies of ambiguity and ambivalence we’ve used in anti-manifestos; or it might be a unmanifesto:

‘not invented from utopian fantasies, but made from existing scraps of materials. ... It will attempt to say something, even something serious, while claiming to say nothing... or at least nothing serious.’ —Julian Hanna & James Auger, The Possibility of Atopia: An Unmanifesto. 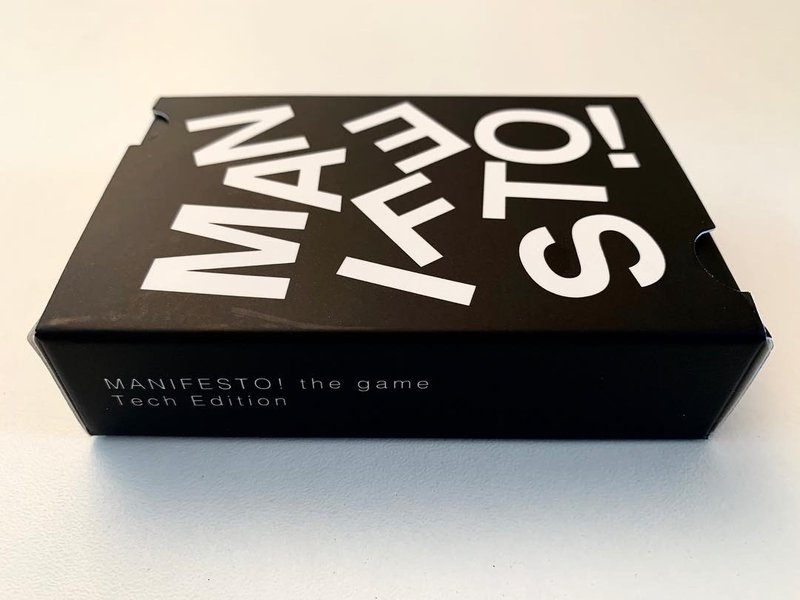 While their confidence might be an affectation, manifestos remain a clear, decisive way to present your message. In a world overwhelmed by noise, the manifesto is having another moment; it is again becoming a feature of daily life. Manifestos are important because they show active concern for the future. At their best they help us to resist dominant futures and imagine new ones. The more uncertainty – the more chaos, upheaval, fear, and doubt – the more manifestos will be written, and (with all caveats) the more manifestos should be written.

This essay is partly (and very freely) adapted from a practitioner reflection we wrote for Multimodality and Society 2.1 (2022).