For some time now we’ve been wanting to add pollution sensors to the Sonic Kayaks, partly driven by requests from researchers and others, and partly driven by our own observations and curiosity. Earlier this year we were lucky to get some funding from the Horizon 2020 ACTION programme to design and test two new low-cost sensors. The sensors we’ve focused on are:

It’s been a bit of a trial by fire trying to get these designed and tested during a global pandemic. It’s proving difficult to get hold of electronics components usually sourced from Shenzhen, we lost access to our local chandlery which has everything you could possibly need for marine prototyping, our studio is now a just box of essential tools on the floor at home, and we can’t test on the water because the local authorities don’t want people taking any unnecessary risks (a bit of an issue for a kayaking project). But, somehow things are coming together, gradually.

We settled on a Plantower PMS7003 sensor. Originally we were going to follow the Luftdaten plans, but we found out that the sensor they use is a little too affected by humidity to be a good choice for putting on a kayak – the PMS7003 seems to suffer less from this issue, but still gives good quality data.

We wired the PMS7003 straight into the Raspberry Pi on the existing Sonic Kayak system, wrote a bit of code to read out the data, and took it for a test walk – hunting out some elusive air pollution in our unexpectedly clean pandemic world. Thankfully Cornwall is a hotbed of dodgy old vans and wood burners with horrendous particulate pollution outputs. A data visualisation from this test session for particulate matter (PM2.5) is shown below, and you can find the same data on Zenodo: 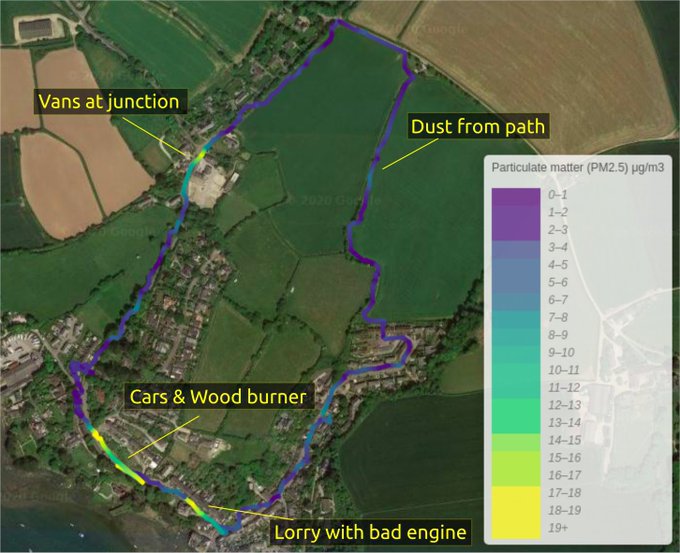 One of the hardest things with the Sonic Kayak project is waterproofing (turns out merging electronics with salt water isn’t always ideal). Since the air pollution sensor by definition needs to be open to the air, we decided that it would essentially be sacrificial. We can waterproof everything else, and just have to accept that if someone capsized, this part of the kit would most likely be destroyed. We designed some housing that attaches to outside of the main electronics box that the sensor can sit in, with some little nostrils to allow air to flow in and out, but hopefully reduce the amount of water splashes reaching the sensor. Here’s the 3D print: 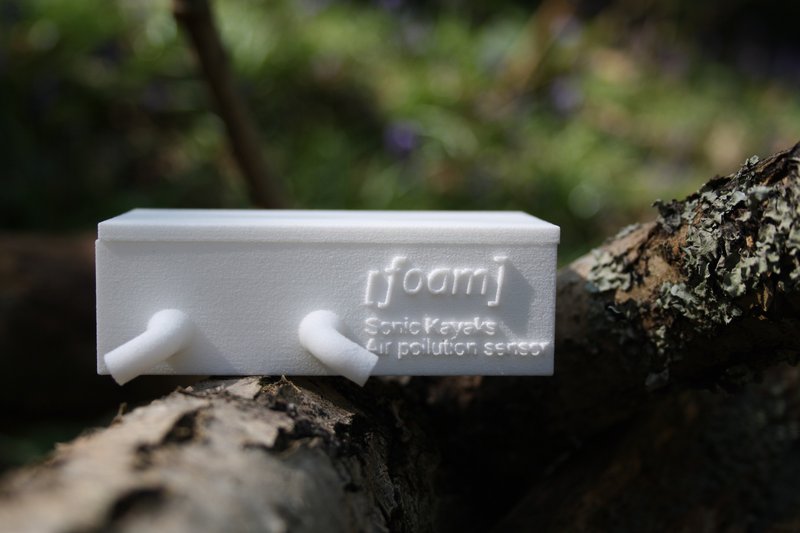 For this one we weren’t starting from scratch as we’d already built a working prototype. The premise is simple – a light source and a light sensor within a dark tube – the cloudier the water filling the tube, the less light reaches the sensor, and the higher the turbidity measurement.

The main challenge was the design of the housing – the sensor has to be at a fixed depth below the water and flow smoothly through the water rather than spinning around as the kayak moves forward, it also needs to not let seaweed and other large particles through, and be robust in case it is paddled into rocks. Most importantly, the components (the light source and sensor) need to be completely waterproof, and the wires coming from them need to be under no strain at all.

We decided to cast the sensors in resin blocks, using simple molds made from Plasticine – after some trial and error we found it best to cut the Plasticine molds using a scalpel, then coat the inside with a few layers of PVA, then allow a 3 day cure time for the resin (even though it says 8 hours, as soon as it touches water it goes cloudy, unless it’s cured for much longer). The finish isn't immaculate, but it does the job and it's cheap and easy for DIYers. More regular blocks could be achieved with a silicone mold 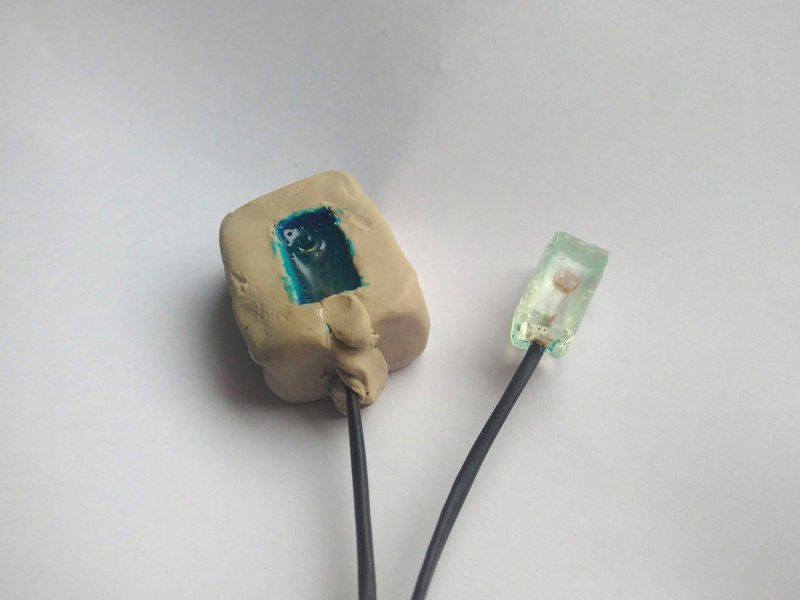 We redesigned the tubing itself to accommodate the sensor blocks and straps to hold it in place, as well as a fin and removable end caps to block seaweed and some light from entering the tube. The image below is of the test print – the final version will be printed in black to block light. 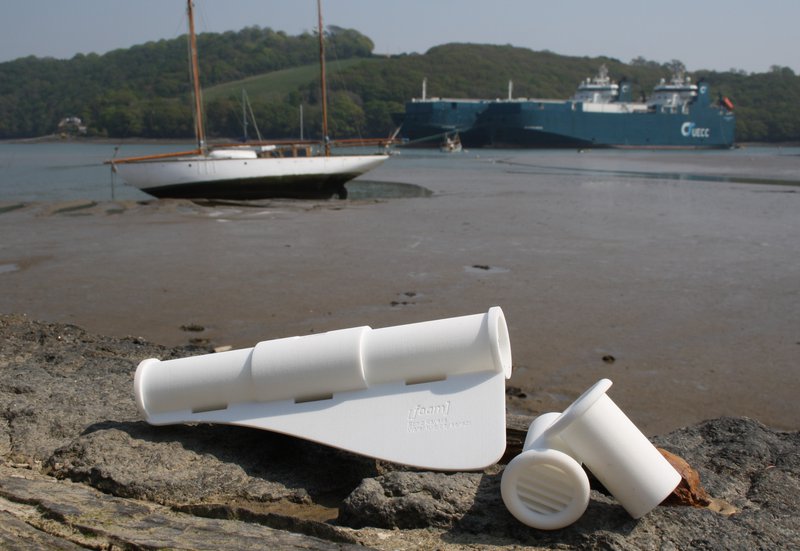 We’ve made a rig for holding the turbidity sensor under water, that fixes onto the kayak handle, constructed from nylon webbing, velcro, dowel, and buckles (all the plans will be available on the wiki soon. This also provides the benefit of giving us something to attach the existing temperature sensors to, to keep them at a consistent underwater depth, which has been a previously unsolved problem with the design. For now, we’ve been testing the rig and sensors with a piece of plumbing pipe, which is a perfectly adequate budget-version of the 3D printed turbidity torpedo design above. 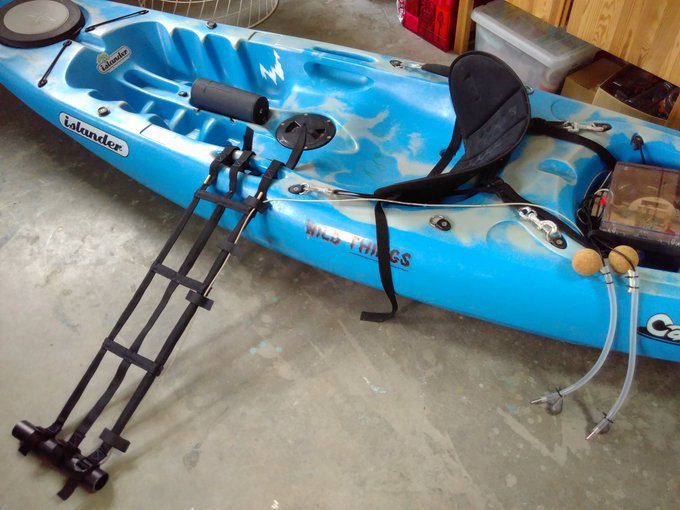 We've tested the turbidity sensor by hanging off the edge of a pontoon and kicking up some mud, and in a more controlled bath setting - blocking the light out of the resin blocks is an important extra step, that can be achieved with a bit of black spray paint (it's not that useful, but the data from the pontoon tests are also on Zenodo).

All the 3D print design files are available here.

Now the design phase is complete, and we have some initial test data, we’re working with Kaffe Matthews to design sonifications for all the different sensors – we need real time sonifications to relay the data collected from the air quality, turbidity, and temperature sensors, that work beautifully together and are understandable for the listener. There will also be sound from the hydrophone which needs to still be audible. We’ll be looking for testers to give us some feedback on the sonification approaches, so do get in touch via email if you’re interested.