Tanglebots for young people with autism

After our previous Tanglebots workshop in Cornwall, researchers from the Cultural Minds group at the University of Exeter got in touch to see if we could run a similar workshop with some adjustments for young people with autism.

The researchers are trying to understand how young people with autism can collaborate in order to work on a shared goal. They were interested in whether workshops like Tanglebots could encourage better communication between people with autism and their families.

Tanglebots was originally developed as part of a research project into weaving and coding. Together with Alex McLean, Ellen Harlizius-Klück and Lovebytes, we developed a workshop format for children and their families, forming a messy introduction into weaving, robotics and coding. Tanglebots are prototype/failed weaving robots (weaving is quite hard, so we start with tangles and see what patterns emerge). We combine harvesting components from e-waste toys (motors, gears, electronics), and using visual programming (Scratch) to control these components, to create robots that make tangles. You can read more about the previous workshop here.

This time we were joined by autism service providers from the Cornwall Council Autism Team, Dreadnought Aspires, a Multi Academy Trust representing four specialist schools, the National Autistic Society, and Sensory Projects. This was to develop a network of contacts and also to get some additional feedback on the workshop. We allocated one service provider to each family, and encouraged them to participate as normal – the workshop was as much for them as it was for the families.

Adjustments made to Tanglebots for this audience:

- Asking for help could be problematic – we made name badges for everyone and bright necklaces to show who was there to help.

- Making the day more predictable – usually in workshops we leave the structure very flexible to allow for changes in direction, this time we planned the structure of the day more fully and provided schedules to all the participants before arriving and on the day so they knew what to expect.

- Avoiding conflict – part of the workshop is about taking apart e-waste toys to harvest motors and gears for making new robots. This time we pre-allocated spaces to work using name tags, and allocated specific toys for each family. These were set up and ready on arrival.

- Feedback wall – usually our focus is on what is made in a workshop and judging how people act/feel on the day. In this case the researchers wanted more detailed feedback so we made a feedback wall with prompting questions and post-it notes to allow people to write their thoughts rather than be put on the spot and asked questions verbally.

- Prizes – previously we’ve had prize catagories like ‘Most people/things incorporated (willingly or otherwise) into tangle’. The researchers were concerned about this creating pressure and potential conflict, so this time we just presented robot kits at the end as ‘thank-yous’ rather than prizes, and didn’t mention them until the day was finished.

- There were some concerns about how the young people with autism would manage being in a new environment with lots of new people. We’re lucky with our studio because it is very spacious, visually unclutted, has plenty of natural light, and easy access to beautiful outside areas for taking time out. When the participants arrived, the screens, equipment and toys were already laid out. Because the goal of the activity was implicit in the environment, many of the young people immediately set to work in operating the screens and putting parts together. This seemed to help them to feel comfortable in the new space. We took care to mention that people could leave at any time, and also kept areas of the space clear for people who wanted to sit/wander elsewhere.

- A final adjustment this time was that we avoided providing lego as a building material. This wasn’t because of the audience, it was because previously we found that it limited what people made. If they began to use lego, they didn’t try anything else. It also made it difficult at the end when participants wanted to take their robots home, as lego is so expensive.

Here is how the space was laid out: 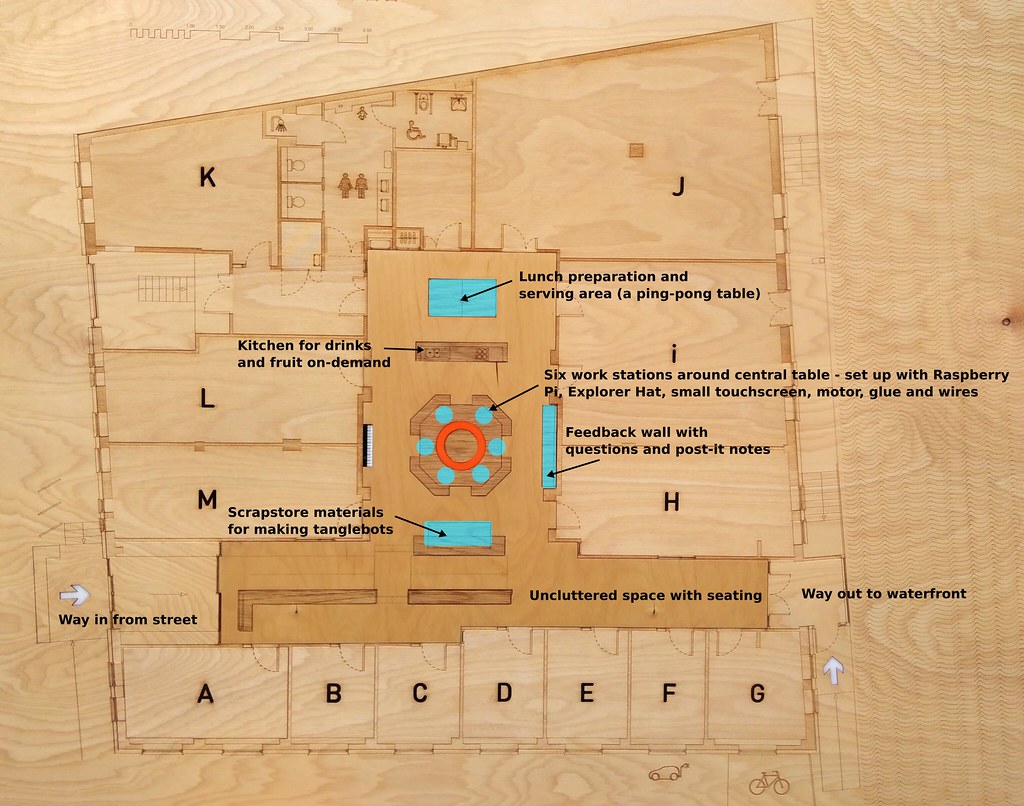 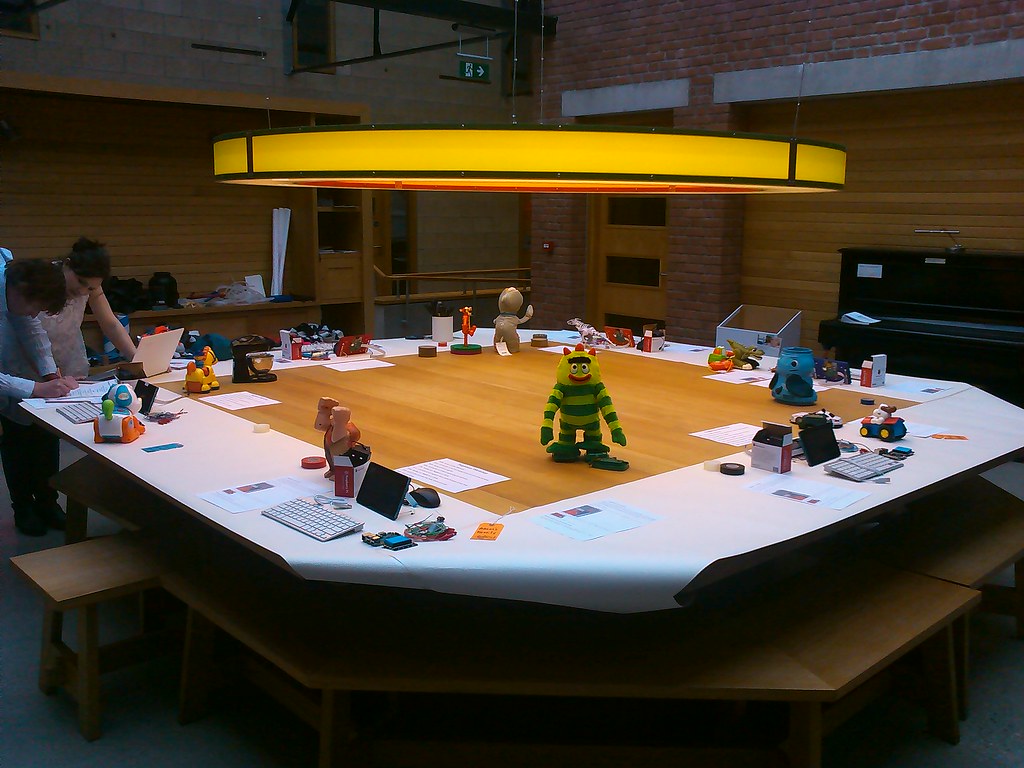 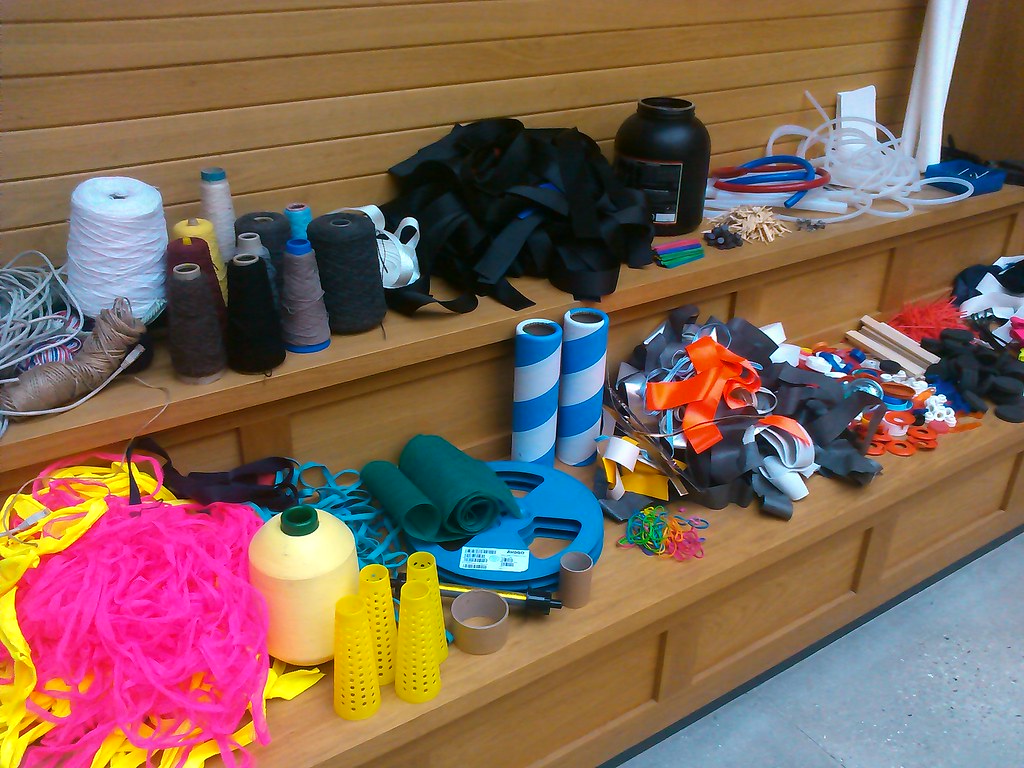 Some things we learnt:

- Previously, Tanglebots was openly advertised whereas this time the participants were families selected because the researchers had worked with them before. This time we found that the parents had a much lower prior understanding of the technology – this may be because previously the participants had self-selected for interest in the workshop. This made it more difficult as there was a much greater gap between the young people’s knowledge and aptitude of Scratch and their parents' knowledge and aptitude. Feedback from young people included that their parents didn’t know enough to help, and feedback from the parents indicated that they might like separate training in Scratch beforehand. 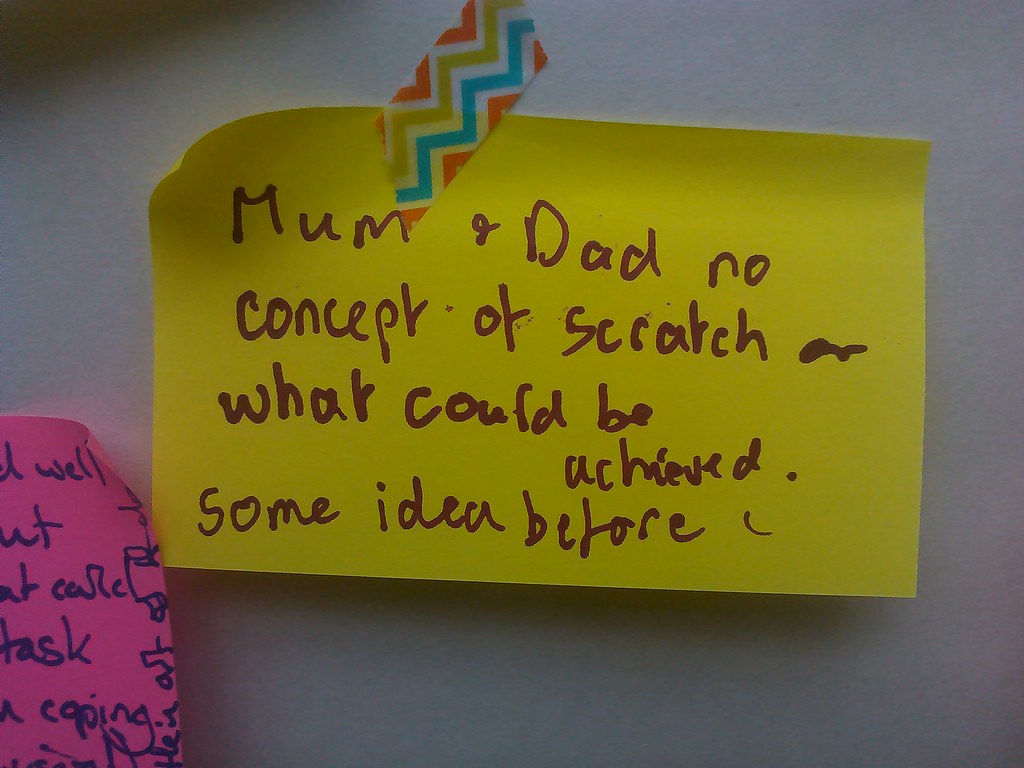 - The young people were very keen on the task, with many starting to take apart toys on the table and programme in Scratch before we got the day started - they were also tricky to stop when it was time for lunch, and at the end of the day. In stark contrast, the parents and service providers indicated that they wanted more structure and a shorter day, with many saying that the young people would do better with pre-defined kits and being told what a ‘good’ tanglebot would look like so they had something specific to aim for. Our usual approach is to run workshops as mini research-projects, with no known outcome at the start. The main excitement of science and technology is being the first to figure something out or build something new – whereas traditional education and many school-based events typically get groups to do the same fixed task with a prior known outcome. It is in line with current pedagogical research that the young people at the workshop thrived with a more open, problem-based project. However - the use of kits is worth thinking about as they may be beneficial for rolling the project out further afield, making it more straighforward for workshop providers.

- One of the young people found that building electronics with the Explorer Hat is a bit of a challenge when you have eyesight problems. This is something that we've often discussed in relation to the Raspberry Pi - which seems to be continually shrinking its form factor without regard to accessibility. We'd like them bigger please! We tried a mid-workshop switch to music making using a powered speaker from the sonic kayaks project and moving from Scratch to Sonic Pi. He quickly found the drum and bass sounds and was away, and at the end he did a little livecoding performance.

- All, but one, service providers and all parents thought that the event promoted at least ‘a good amount’ of communication and teamwork in their group. However, most of the communication was surrounding the physical building of the robots, rather than the Scratch programming. Providing more screens for parents in the training phase (screens were monopolised by the young people) might help bridge the knowledge gap between parents and children and enable more communication about the programming aspect. All, but one, service providers and all parents thought that a future series of workshops could provide either ‘a good amount’ or a ‘great deal’ of benefit to young people with autism and their families. This is what the researchers were mainly interested in, so it provides promise for equivalent approaches in future. 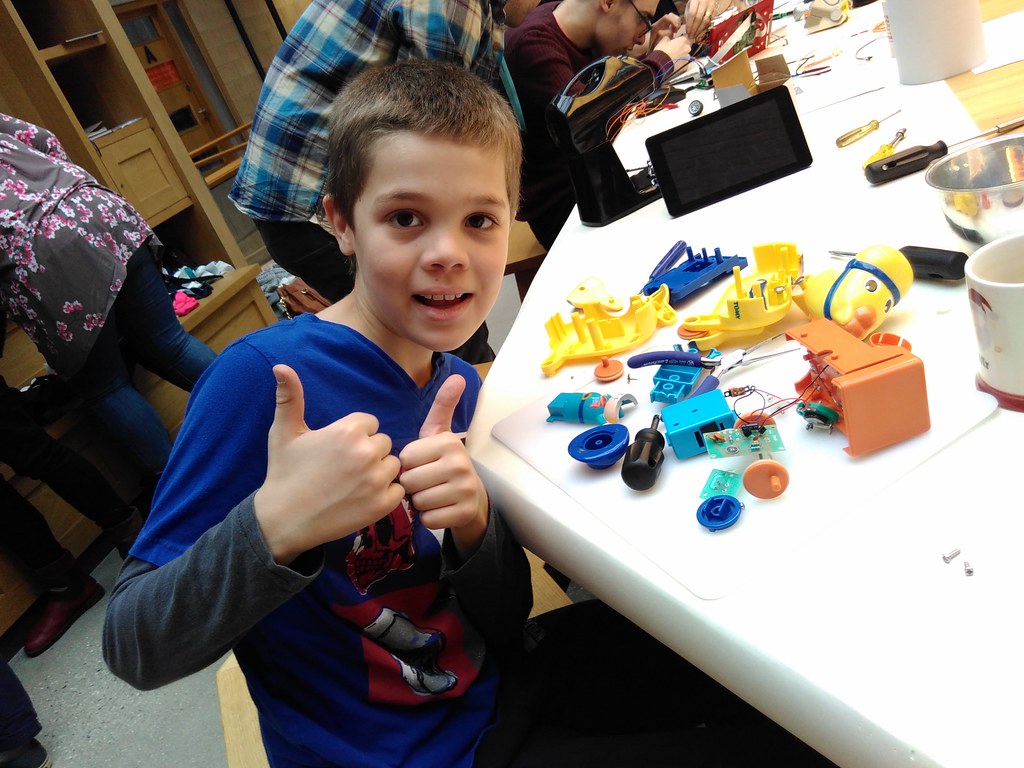 Some things we would recommend for others wanting to run Tanglebots for young people with autism:

- Provide some marker for when people want to ask questions. Although we tried to make this easy, it probably wasn’t easy enough. Flags that could be waved or propped up could work well.

- Some feedback suggested that drawing plans of the Tanglebots could have been helpful. We covered the table with paper, partly to protect the table but also to allow drawing, but didn’t explicitly say that people could draw on it. Previous groups have naturally used the paper for drawing. It would be worth providing pens and explicitly saying that this is possible, or using whiteboard roll (which sticks with static) instead – although this has questionable environmental costs as it is non-recyclable plastic.

- It was also suggested that communication between the young people with autism and their families could benefit from more structure and scaffolding. One approach would be to provide wall posters, stickers, mini wipe boards etc, just off the main table. Midway through the morning families could move away from the main table and be encouraged to articulate their vision for their tanglebot (either drawn or written) and allocate roles to each other. This would also have the benefit of breaking up the day.

- Providing a separate space with manual weaving equipment could be beneficial for inspiration, a change in task and a way to take time out.

- In the introduction, it seems particularly important (mainly for the adults!) to state that there is no ‘right’ tanglebot.

- The workshop could easily be adjusted to make robots that make music, or other open-ended tasks, depending on the interests and experience of the people running it. 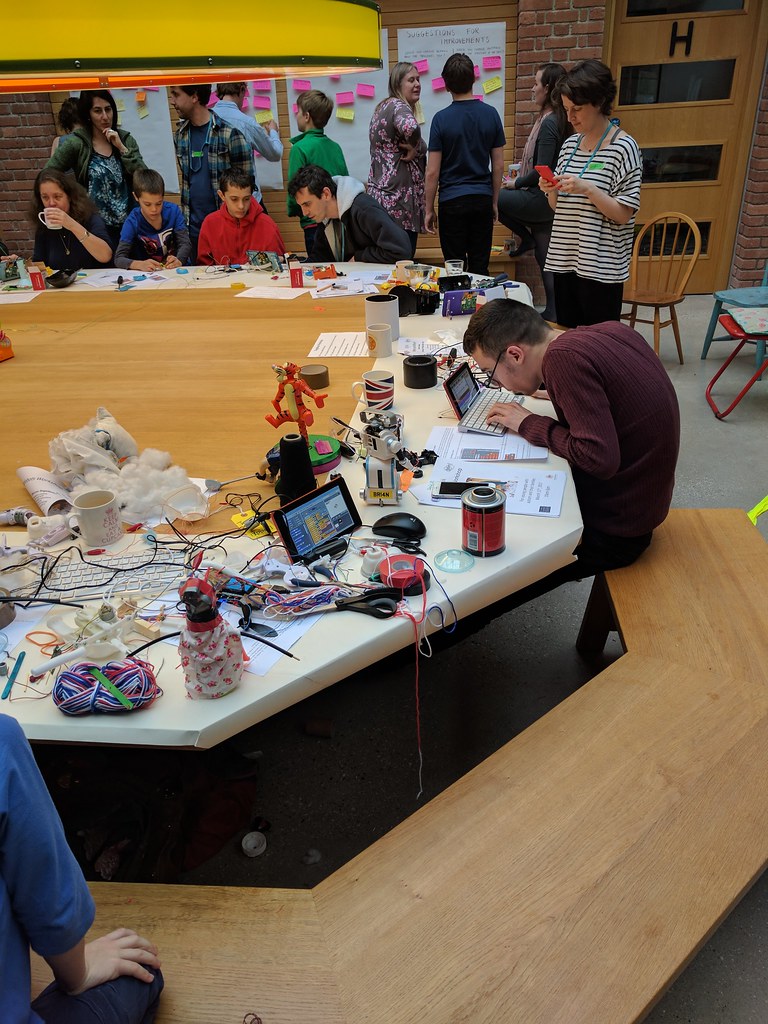 Cornwall Scrapstore – where we get most of the materials for making the tanglebots – we lay the materials out in one area so people can help themselves to what they need.